--------------------
Special Abilities
--------------------
Crossbow Maven - Shalluk is proficient with all kinds of Crossbow.
Grit - A pool to power Bolt Ace Abilities. Shalluk has two points. Can be regained by killing and critting enemies.
Deeds - Special abilities fueled by Grit.
- Sharp Shoot - Spend a point to hit touch AC with a crossbow
- Vigilant Loading - As long as Shalluk has a grit point, reloading a crossbow does not cause an attack of opportunity.
- Gunslinger Initative - As long as Shalluk has a point of Gritm he gets +2 to his Initiative.
- Pistol Whip - Spending one grit point, Shalluk can crack someone with the butt of his crossbow for 1d10 damage. If succesful it causes a CMB to be knocked prone.
- Shooter's Resolve - Spend 1 grit point to ignore cover on one standard action attack.
Duel Cursed - Shalluk is under the effects of both the Tounges and Haunted Curse. Only the Haunted Curse improves with level.
Spirit Sense - Shalluk can detect Undead and Incorporeal Creatures at will, as if using Detect Undead but it detects all types at once.
Spirit Mastery - 2 Ranks. As a standard action, Shalluk can summon either a Defensive or Offensive spirit of the same alignment as himself.
- Offensive Spirit
HP - 7
AC - 14
Saves - As Shalluk
Movement - 0
Blur - 20% miss chance
DR 5/Magic
Ranged Touch Attack - +8 to hit, 2d4+4 damage.
Appearance - Shalluk’s offensive spirit takes the form of a well armoured woman carrying a heavy repeating crossbow eerily similar to the one Shalluk carries.
- Defensive Spirit
HP - 7
AC - 14
Saves - As Shalluk
Movement - 0
Blur - 20% miss chance
DR 5/Magic
Warding Spirit - All allies within 10 feet get a +2 deflection bonus to AC.
Appearence - Shalluk’s Defensive Spirit appears to be a middle aged man carrying a Tower Shield.
Solar Mystery - Shalluk’s power is drawn from the sun.
- Astral Caravan - Shalluk and up to his character level in allies can travel through the borders of the planes, travelling up to 50 miles an hour. This must be spent in hour increments. Number of hours is the equivilant of Oracle levels.
​
Ultimate Versatility (Ex) Once per day, you can temporarily change one decision made for one of your class features. This change lasts for a number of minutes equal to half your character level (minimum 1). During this time, you're treated as if you had always had the new class feature. For example, you could use this ability to change the decision made with the arcane bond class feature, causing your bonded item to disappear (along with all of its bonuses and restrictions) and a familiar to appear in its place. This doesn't affect any prepared spells or spells you have already cast. If the new ability is limited in its uses per day, you receive half the normal number of uses (minimum 1). When this ability ends, your previous choice returns with the same number of uses as before you used this ability. If you use this ability to change a class feature that grants access to spells (such as a bloodline, patron, domain, or school), you lose access to any spells from the old choice but don't gain the ability to cast new spells. When the effect ends, the previous spells return and can be cast again. You can use this ability to change a feat or skill if you receive it from a class feature, but any other abilities that rely on the missing feat or skill as a prerequisite don't function while this ability is in effect. 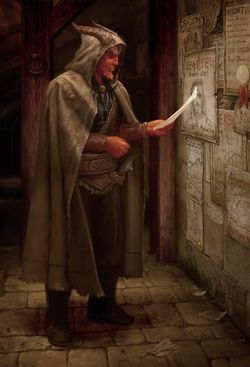 --------------------
Appearance
-------------------- ​
Old Appearence:
A tall, red skinned humanoid with long-ish black hair and heavy horns, Shalluk is what many people think of when they think of a Tiefling. Tall, thin and with dark yellow eyes, he fits many people’s perceptions. People tend to miss the slightly sad look in his eyes, the fearful hunch of his body trying to make himself seem smaller and less of a threat.

Shalluk’s appearance is a contradiction. A well groomed body with a ratty old cloak over the top, expensive equipment hanging by scavenged gear. Although Shalluk has a surprising amount of money he is careful to conceal that detail, and makes sure that much of his non-essential equipment looks old and worn.

Rake thin thanks to a lack of food for many years, Shalluk wears baggy clothing to hide the fact that while not strong he is very fit and lithe, able to move quickly. His dark red skin is naturally covered in a surprising amount of hair that almost qualifies as fur, although it only tends to grow where most human would get it, and it is occasionally parted by scars.
​
Shalluk also talks with a baritone voice and a upper class accent from Cheliax, his original country.
--------------------
Personality
-------------------- ​
​Shalluk is a coward. He fights at a distance to try and keep himself safe, and calls on spirits when he needs to. Even then, he prefers to avoid fighting, using a certain level of natural charisma and diplomatic skills taught to him at a young age to talk his way out of a situation.

That being said, Shalluk understands the need to fight. He can overcome his fear when he has to, and while he tries to avoid getting into a fight he is relatively lethal. He has to be, as there has been many situations where being a Tiefling has cause it’s own share of problems. With his current desire to become a better person and a more positive force for good it’s also less likely he can be scared into submission.

Generally kind hearted thanks to his upbringing, Shalluk is also somewhat suspicious thanks to life on his own. Shalluk is also fairly shy for the most part, but his natural skill with words means he often ends up talking when he’s not entirely comfortable. At such times such shyness and honesty tends to lend credence to what he says.
--------------------
History
--------------------
​Some people are born strong, or lucky, or beautiful. Shalluk was born none of these things. But he was born noticed. Something took an interest in the Tiefling from the moment of his birth, and odd things happened regularly happened around the babies crib. Bottles, books and vases were knocked over even when the child couldn’t possibly reach them. Odd noises, like formless whispers, shimmered in the air when there should be silence. Occasionally people around him swore they felt a tug, like someone trying to get there attention.

Despite all this, Shalluk was raised wealthy, in his mother’s home. His mother was a adventurer, as his father had been. Indeed, since both appeared human, it was whispered that Shalluk was the result of infernal interference, a devil corrupting the child in his mother’s womb. Shalluk heard those whispers from a young age, but never mentioned them.

One evening a messenger arrived for his mother. Her husband was missing, the only clue a shattered, barely working pistol. Leaving her son in the care of trusted servants, she gave him two gifts - a replica of the repeating crossbow, and the remains of his father's pistol. Shalluk accepted both and watched her rise away.

Unfortunately, her trust was misplaced. Shalluk’s issues grew worse soon after, soundless voices only he could hear whispering nonsense words in his ears. The servants of the house grew afraid on the lithe, red-skinned creature that was supposed to be there master. He clearly didn’t deserve the wealth he possessed, the attention lavished on him. He was a curse made flesh...why else had both his parents fled?

One night, the house was attacked. Shalluk had no idea the masked people were the same people who were supposed to care for him. Terrified, he grabbed the handful of items that meant something to him along with some gold coin and fled. Still young, he didn’t understand that no one was coming to save him.

The streets were not kind. They’re even worse for a small Tiefling child. Shalluk quickly learned to use his speed and dexterity to escape, to grab supplies and to hide. Most vitally he hid those things most precious to him, waiting for the news of his mothers return.

But the voices in his head whispered, and grew stronger. One night Shalluk was curled up in the hidey hole he had found for himself groaning at the sound of a new voice, when the noise brough bigger, older boys. They beat the half-grown Tiefling, and found the gold coins and weapons. The battered gun they tossed aside, but the bow...well, that they could sell.

Terrified and alone, the voices in his ears, Shalluk cried out, “Keala! Muras nia!” Although he had no idea what he had said, he knew what it meant - mother, help me. Child’s plea. But even as he said it he felt something inside him reach out and touch the newest voice around him. And it answered. A ghostly figure appeared, a powerful woman with a crossbow. It fired a bolt, killing the leader of the boys and sending the rest packing. And Shalluk knew that face oh so well…

Convinced he had somehow called the ghost of his own mother, Shalluk gathered what he had and fled. He discovered a handful of other abilities - almost nothing could hide from him, and he had some small ability to cast spells. He was also a good shot with the heavy repeating crossbow once he was old enough to use it.

Wandering, afraid of how Tieflings were treated, Shalluk grew, afraid and lonely. During one night Shalluk heard fighting, and went to investigate. He arrived too late, finding a Paladin dead at the hands of a giant she had, in turn, slain. He buried her body and burned the giant, but as he sat and watched, his self loathing grew. He was no use to anyone. He was a defiler of the spirits, a coward. The dead woman had been brave, courageous, everything he was not. She should live and he should die. No one would miss him.

But, he thought to himself, I can not swap my life for hers. But maybe…he glanced at the gleaming wood and bronze of the crossbow. Maybe he could remember her by doing what she no longer could. Still afraid, his heart beating hard, Shalluk marshalled his resolve and headed for Sandpoint, the half remembered tale of a friend of his mother’s in his mind as a destination. Maybe it would be a place to start...
Powered by