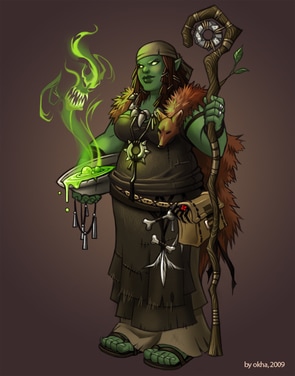 --------------------
Appearence
--------------------
Tall by most standards, Daliya has smooth, dark grey skin that’s slightly colder to the touch than actual skin probably should be. Her build is also heavier than one would expect on many woman, with powerful muscles especially in her shoulders and arms.

Her hair, for lack of a better word, appears to be a set of long, flexible crystal rather than human hair and is a deep purple in colour. Both her eyes and lips have an amethyst colouring to them. Her left shoulder, often bare when not in armour, has a large burn scar on it where the skin appears to have almost melted and flowed. Tattoos run along and around the scar, focusing on it.

Daliya has long earrings in both ears, pierced all along the ridges and through the lobes, running in a single silver chain along the length and dangling down to her neck. Both have amethysts in the settings. Her clothing tends to be blues and greens, and she prefers to walk barefooted when not in armour. Most of the time she’s also carrying a backpack containing her various bits of equipment. She has a deep contralto voice and smells like wet stones in the rain.
--------------------
Personality
--------------------
​Daliya is stubborn and self centred. These two things occasionally make her difficult to get along with, but her sense of personal freedom is one of the things that has endeared her to some of the people in the Shackles, and made them feel like she’s one of them. It isn’t that she can’t, or won’t, work with others and take orders. Most of the time she’s happy to work as part of a team, and understand the vital importance of obeying a captain’s commands, that every shiny object that she wants can’t be hers. But she expects her commanders to listen if she has an issue, and if they won’t she’ll walk. Her loyalty is to herself and her needs, and with the exception of a handful of lovers she’s unlikely to put aside that selfishness.

She’s also pragmatic. If she can’t save a leg then she will cut the leg off. If someone is stuck in a fight and she can’t reach them, she won’t try. She is coldly and brutally pragmatic when it comes to saving the most and gaining the most in any situation. She might feel regret or sadness when it comes to these choices, but at the end of the day, she’s alive to feel sad. She can live with that, quite literally.

--------------------
History
--------------------
​It’s a little unusual for a Druid to end sailing the seas, looking for plunder and fame. Daliya has rarely been accused of being usual, however. An Oread born a proper young lady to a proper family, Daliya always chafed at the social constraints placed on her. Tradition is important to the Oreads, and many of those traditions were distorted by time. There was no reason her brothers could learn magic or fighting while she was learning social niceties. Oread and Shaitan were soldiers, mages and adventurers - her parents ideas of what was ‘proper’ for a young woman were ridiculous.

Her parents sighed and tutted and thought about how to tame the wild child. It was then they introduced her to the man they had arranged for her to marry.

This would have been a big enough problem for any spirited, independently minded young woman who was more interested in learning how to deliver a kick than a courtly phrase. It was even more so for Daliya, who was openly gay. Her fiance, all things considered, took things extremely well - he was not much more thrilled with the idea of being married than she was, albeit it for different reasons. Together, they hatched a plan.
It was a reasonably simple plan. They simply insisted that, with a handful of trusted servants, they retire to a small country estate so that they could learn about each other before the wedding. The servants and separate bedrooms would make sure nothing improper happened. Once out there Daliya simply planned to sneak away, with her ‘fiance's’ help and as much money as she could carry from their joint funds.

Stuck in there ways and tied to tradition, however, did not mean that parents are stupid. Suspecting something of the sort Daliya’s parents sent a second group of house soldiers to patrol the forests around the estate, and bring her back when she tried to escape. One such group quickly found and caught Daliya. The chase was short, but Daliya ended up being hurt, burned by the campfire when the guard dragged her in. It was better, they decided, that she not go back and tell her parents what happened. Better she ‘escaped’ and was never found.

And hey, if she wasn’t going to go home, maybe they could enjoy her company for a bit…never seen an Oread naked...wonder what the soft bits are like...

It was then that Daliya reminded them of one of the things her parents had hated - how her brothers would teach her the unarmed combat skills they were taught. Just in case. It turned out she was good enough to drive her fist into one of the men’s throats with enough forced to crush his windpipe, and brained the second with a rock.

Daliya fled into the woods with the supplies she could take from the soldiers, bitter and hateful that such men had been sent to hunt her. She wanted to never, ever be hunted again. And so she learned. She learned from any woodsman, hunter and odd Druid she could find. How to track and hunt. How to avoid being hunted. And most importantly, how to avoid capture. She even joined the local chapter of the Pathfinders, for a while, before growing somewhat bored.

She used her skills to support herself, robbing the odd merchantman or trader who managed to annoy or irritate her on her travels. None of them died, but many bruises and lost merchandise were, eventually, enough to put a bounty on her head.

Daliya was reasonably sure she could avoid them for as long as she wished, really, but she was finding life in the forest lacking in excitement and challenge. She loved nature and the independence it gave her, but it occurred to her that there were many other kinds of nature out there that she had never seen. She could live in the forests until she died, quite comfortably. Instead, she travelled to the Shackles, a place where, rumour had it, it was hard to not find adventure. And a place as far from the comfort zone of an earth-related being such as herself as possible.

She signed on as a ship’s doctor. Pirates being pirates, it was not long before a crew member tried to be inappropriate towards Daliya. It turned out that being able to shift into a sixteen foot tall giant and literally hammering the people who upset you through a deck barehanded was an excellent cure for such things, and she made it generally known that she disliked that kind of behaviour towards others as well. She didn’t have to make the point again, although the crewman she’d hammered did need a new pair of peg legs.

Occasionally changing crews and ships when she felt bored, Daliya has finally transferred to her current vessel.
Powered by