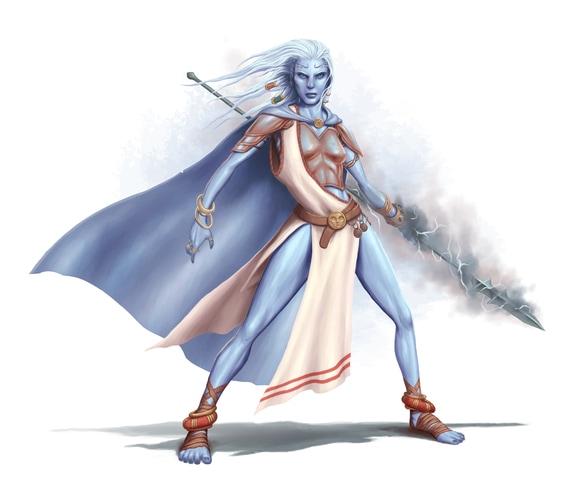 --------------------
Appearance
-------------------- ​
Of medium height and a lithe build, Blink resembles a Sylph to those who know what such a creature is. Lithe and airy, with a constant breeze tugging at her pale blonde hair and clothes even when indoors or in other places where such a thing shouldn’t happen. The most noticeable thing is her skin, covered in a series of lines and swirls that look like tattoos. However, she was born with them etched into her skin and unfading over time.

Typically wearing loose, baggy clothing to hide her somewhat minimal armour and long skirts with slits up to the thigh to allow easier movement, Blink typically wears blue and white clothing. She will sometimes add gold studs to her nose and ears, when she feels a need to. A child of the streets, Blink never got the hang of shoes and finds them strange and uncomfortable, and so tends to wear sandals only when absolutely needed by manners or dangers.

Blink’s voice is a mezzo-soprano, and she typically smells oddly neutral, as she tries to use unscented cleaning products on both herself and her clothes and avoids perfume like it contains a plague. When she wears makeup she uses shades of blue and gold.
--------------------
Personality
-------------------- ​
​As with many Sylph, Blink is inquisitive and fond of secrets, although she tries to put that desire to a better use than many by hunting for information useful in her chosen profession. Intelligent and knowledgeable, Blink has picked up a great deal of information and skills that she thinks will be useful, although she is still young enough that putting those things into practice is not always very easy.

Blink is more friendly and social than many of her race, but at least some of that is a facade, as she feels that people who like her are less likely to betray her. She has a limited level of trust, as her early life was brutally hard, but her father and the mysterious stranger who saved her life have both proven that some rare people are worthy of trust.

Blink thinks of herself as a pragmatist. That’s not entirely true, however. She isn’t cold or calculating enough to be as ruthless as she’d need to be, instead willingly spending resources on things and people simply to help out. This doesn’t mean she isn’t practical, but she simply isn’t as calculating as she would like to believe. She feels she owes it to people to help them, as others have helped her in the past.
--------------------
History
--------------------
​There are places where children can survive without their parents, where people will help them with their hardships. Khatapesh is not one of those cities. The merchant city revolves around the religion of coin, and unless you have it you won’t find anyone to help you. Many of the orphans in Khatapesh are captured by slavers, but a small population manages to survive due to some innate skill or ability. So it was with Blink.

She discovered early in her life that she had an innate ability to teleport. Only short distances, and only so far as she could see...but doors aren’t usually too thick, and when you’re small and stealthy it’s surprising how easy it is to find a gap to peek through, a window to glance through or a lock to see through. With such an ability, getting coin isn’t too hard. As long as you don’t mind stealing, and as a child Blink had no idea why such a thing would be wrong.
​
Even in Khatapesh, such crimes were unusual. Although the sums stolen were rarely large, the Guard could not locate any clues of the thief in question. No one assumed that the little beggar girl with the odd markings that was occasionally seen near such places would have anything to do with such crimes.

Well, almost no one.

When a bounty was posted for the capture of the thief, nicknamed ‘Blink’ due to the rarely seen teleportation, adventurers in the city became more interested. One of them, a Dwarf named Zamec Vala, was more observant than the others. He noticed that at a handful of the crimes a beggar girl with odd skin markings was mentioned, and became suspicious. Finding the girl, he allowed her to overhear that he was keeping something valuable in his room at a nearby inn.

Blink was young, and the simple ploy was enough to catch her in the act. Zamec, however, had no interest in turning a child over to the ruthless guard of Khatapesh. They were not fond of thieves, and simply being a child was no excuse - slavery or a lost hand was Blink’s most likely fate.
Instead, the Dwarf travelled with the child around the world, eventually settling with a now teen Blink in Kenabres, and found there was a need for such a warrior as himself in the city fighting against the hideous incursions of the Worldwound. Now his adopted daughter, Blink also settled in - learning to enhance her skills in both the arcane and other, less reputable skills that were still useful in an adventurer’s life.

During one such training session Blink ended up, lost and alone, in the wastes of the Worldwound. She had snuck from the city to try and follow a caravan but lost it when monsters attacked. Lost and unable to find her way home, she thought she was going to die, especially as a group of cultists started scouring the area for survivors from the caravan.

It was then that she was found by a woman. At first she assumed that it was another cultist, but the holy symbol of Densa she wore convinced Blink that the woman was there to help. And help she did. With bow and fine words she got Blink back to Kenabres and her father, although she never gave Blink a name to find her by. She always wondered about the woman, and why she seemed so sad…

Blink grew up, learning to master her arcane abilities and thieve’s skills into a unique blend of fighting and casting. Hoping to one day join the Crusades and help re-take her adopted home, Blink attended the celebrations at the Cathedral of St. Clydwell. Of course, things went wrong soon after...