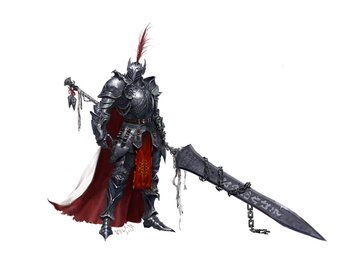 --------------------
Appearance
--------------------
Tall for a half-orc and a woman, Ceridwen is not as massively built as her father, but is still bigger than most people. She stands at nearly seven feet tall and has moderately heavy build, with strong arms and legs, but her frame seems smaller than her height might suggest. She still towers over most people, however.

Small but noticeable tusks protrude from her lower lip, and her skin is a dark shade of green. She shares her father's dark hair and her mother's blue eyes. Her right arms, hand, shoulder and the upper part of her back are covered in tattoo-like markings of silver that stand out brightly against her skin.
​
Most of them time, she wears her suit in one form or another, although in more social situations it might well be hidden in it’s Astral Skin form. She typically wears loose, easy to move in clothing of simple colours and plane make. For more polished wear she wears the formal robes and silk tunics of Khatapesh. She typically wears Cinnamon perfume and white gold jewellry.
--------------------
Personality
--------------------​

Calm and collected, Ceridwen balances aggression and defence in combat. Although she has magical abilities, she prefers to rely on her swordwork - another gift of her father. Relatively outgoing friendly, if somewhat oblivious on occasion and not especially perceptive, Ceridwen gets on with most people.

Ceridwen is also loyal, determined and honest. She won’t break her word and won’t abandon those she fights with. Her reputation for honesty is helpful but not entirely accurate - it turns out she’s mostly just a terrible liar rather than having anything against lying, per say, but she doesn’t like doing it unless necessary.
--------------------
History
--------------------

One of the children of the infamous Fighter Zhen Halfblood, Ceridwen was raised as much by nannies and carers as her parents, who were often called away for various adventures and business dealings. Ceridwen never blamed them for that, as they were important people. Instead she valued the time she spent with them, and enjoyed her time with her siblings and step parents.

As she grew, and showed that she was likely to grow to a similar size as her father, Ceridwen wa taught the fine art of fighting. As with her father, she ended up wielding a greatsword, even if she couldn’t fight with the huge version he prefered. Still, she proved adept with the heavy blade, and inherited her mother’s gift for healing and protective skills.

Growing up surrounded ancient art and artefacts rescued from various cursed dungeons and undead tombs, Ceridwen found herself fascinated by the odd history of Golarion. She became especially fascinated by the odd nation of Numeria, and its history from beyond the stars. When she reached the age of maturity she chose to leave, her parents paying her way to Numeria as a parting gift.

As she travelled the country, looking in a variety of odd tombs, she developed an understand of the odd technology that littered the nation, and the odd tongue Androffan. Relying on that, she attempted to try and enter an especially odd tomb. No one had returned and she soon found out why - a strange liquid coated the place. It had changed the other people who had entered the ruins, but Ceridwen’s huge size and limited exposure meant she was able to escape.

Fleeing, she made it to Torch before succumbing to the techno-infection. There the wizard, Khonnir Baine, was able to help her overcome it.
She discovered that the illness had left her with odd marks, and granted her the ability to call up set of armour. When the ‘infection’ was active she more powerful, stronger. She could wield a vast slab of iron from one of the down vessels, sharpened and shaped into a massive greasword, and then enhance it even further.

Having just returned from her first journey since her illness, she discovers the flame of Torch has died...