Traits
Steel Skin - Put on heavy armour in half the usual time, and gain a great helm that adds +2 to Intimidate when worn with heavy armour..
Glory of Old - Increase the bonus of Hardy by +1.
Racial Traits
Dark Vision - Able to see in total darkness 60ft.
Slow and Steady - Movement is never altered by weight.
Hardy - +2 against spells, spell-like abilities and poisons.
Weapon Familiarity - Dwarfs are proficient with battleaxes, heavy picks, and warhammers, and treat and weapon with ‘Dwarf’ in the name as a Martial weapon.
Stoic Negotiator - Adds +2 to Bluff, Diplomacy and Profession (Merchant). Replaced Hatred, Stonecunning and Defensive Training.
Relentless - Add +2 to Bull Rush and overrun attempts while on solid ground. This replaces Stability.
Craftsman - Add +2 to craft or profession checks involving stone and metal.
​
Skills Diplomacy +14, Bluff +14, Intimidate +10(12), Stealth +8, Acrobatics +8, Sense Motive +9, Perception +9 (-4), Profession (Merchant) +8, Climb +9, Swim +9, Craft (Arms and Armour) +8(10)
Languages Dwarf, Common, Infernal.
Combat Gear Masterwork Dorn Dergar, Masterwork Full Plate
Runes
Valk - +1 to weakest save. Levels 1, 9 and 19
Milaut - +1 Deflection Bonus to all saves. Level 2 and every 4 levels thereafter.
Milera - +1 Deflection bonus to AC and CMD. Level 2 and every 4 levels thereafter.
Tila'ka - +1 Enhancement Bonus to 4 stats (no more that 2 points per stat). Level 4 and every 4 levels thereafter.
Tila'je - +1 Enhancement Bonus to Natural Armour. Level 4 and every 4 levels thereafter.
Kou - +1 to Weapons and Armour. Weapon enhances at 3rd level and every third after that, and armour 2nd and every 3 after.

Other Gear
Money, 1000gp
--------------------
Special Abilities
--------------------
Oracle Abilities
Clockwork Revelation - Gain access to the strange powers and abilities of an Oracle Revelation.
- Mechanical Arms - Gain a +2 racial bonus to strength, and a +4 bonus to CMB. At 11th Strength bonus becomes +4.
- Mechanical Legs - Increase movement speed by +10, and always count as a running start for jumps.
- Steel Skin - Add +2 to Natural Armour, and a +5 Fire and Cold Resistance. At 11th level these become +4 and +10, respectively.
Dual-Cursed - A dual cursed Oracle takes two curses, and only advanced.
- Aged - Count as a Venerable member of your race mentally, but a Old one physically.
- Sanguine - Suffer a -5 to perception to spot traps or foes, but cannot be demoralized and gain a +1 per five levels luck bonus to AC in the surprise round.
Vigilante Abilities
Dual Identity - Creates a second, secret persona. They use social talents in this persona, and cannot use vigilante talents without risking discovery. In addition, the persona can have a different alignment.
Seamless Guise - Grants a +20 to Disguise to appear as your current persona, not another identity.
Vigilante Specialization (Avenger) - Gain Full Base Attack Bonus.
Unshakable - Add Vigilante Level to DC of intimidate checks made against him.
Social Talents - At every odd level gain a talent for use with Social Persona.
- Renown - Gain bonuses within a small village or neighbourhood, and a reputation for both social and vigilante personas.
-
Vigilante Talents - At every odd level gain a talent for use with Vigilante Persona.
- Armour Skin - Do not apply armour check penalties on light and medium armours to acrobatics, stealth and escape artist checks.
- Heavy Training - Gain Heavy Armour Proficiency as a bonus feat, and the Armour Skin talent applies to Heavy Armours.
Favoured Class Bonus - +4 Skill Points.
--------------------
Appearance
--------------------
​Standing a little taller than most Dwarfs, Balamar has the stocky and powerful build commonly found in her people. Her iron grey hair is typically tied back out of her eyes with a scarf or simply tied back in a simple bun, and the skin around her eyes and mouth is cracked with age and laughter, given her a face most would call handsome rather than pretty.

Typically Balamar is dressed in functional, long dresses with heavy boots and a leather apron and gloves to protect her, although they’re also intricately patterned in someway as a general rule. Whatever clothes she does end up wearing, they will always cover her legs and arms completely. She typically smells of oil and grease, and her contralto voice bears a distinct accent.

If someone were to see her undressed, they would discover several interesting facts. First, her body is significantly more tone than one would expect from an apparently aged Dwarf. Secondly, half of it is missing. All four limbs have been replaced with intricately constructed artificial limbs, made apparently of brass and iron and filled with intricate clockwork. Deep red runes burn dully on the metal. The four are linked by a metallic spine that runs the length of Balamar’s back, each also crafted with the same runes.
​
As Siege, she wears a heavy suit of Full Plate with a tall great helm. Her unique situation and some engineering mean she’s somewhat taller in the armour than when out of it, helping her diguise (although not enough for anyone to doubt she’s a Dwarf). Typically this armour is painted a dark shade of blue with bronze trimmings. The greathelm she wears hides her face and helps distort her voice, although she doesn’t typically speak much regardless, and when she does her accent is gone.
--------------------
Personality
--------------------
​Calm and stable, Balamar has seen the worst of life and lived through it, although at a terrible cost. Once the worst has happened, however, you generally don’t have to worry too much about the rest of life. She is sanguine in the face of life’s troubles, and rarely panicks or worries. She absolutely won’t bow to intimidation, although in a pinch she may pretend to short term for a longer term gain.

Hands on, she crafts and sells her own swords and armour to adventurers, often giving them simple tips about what might suit them best and how to stay alive. She’s well known for being open, friendly and generally more honest than the average merchant. Much more outwardly friendly than most of her race, she’s often seen laughing and chatting with people. When approached she is usually willing to help or listen, as much as a ‘retired adventurer’ is able to do, at least.
​
As Siege, that calm comes across as a ruthless drive to a goal, and she rarely exhibits much in the way of emotions. Her humour is more sarcastic and mean, when she bothers with humour at all, and she tends towards efficiently finishing a task with the least amount of collateral damage. 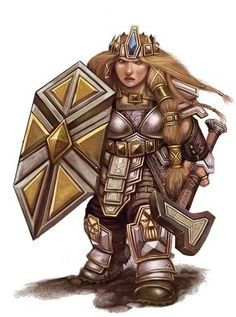 Once a member of the Queensguard of the Dwarf Clan Embersworn, Balamar was a friend and protector of the Clan’s rulers. When the Hold was under siege and in danger of being overrun it was Balamar and a handful of others who were asked to venture into long forgotten and trapped vaults and crypts for the means to protect the Hold, as it was said that weapons and artifacts of enormous power had been sealed away generations before.
​
Of course, such things are usually sealed away for a very good reason…

Desperate times called for their discovery, however, and Balamar and her allies went into the depths. It was a long, hard journey. Many died before even reaching the vaults, braving the edges of the Darklands and their inhabitants to reach the doors. Inside was...well, probably a place not quite of this world, a realm dominated by madness. The laws of reality didn’t seem to apply. The best guess the Dwarfs could come up with was that it was, in fact, a demi-plane somewhere near the Plane of Chaos.

More died, often in strange, unusual and horrifying ways, but the Dwarfs were collecting weapons and artifacts. A rod that shot acid like the great Black Dragons of legend would cut swaths of the enemies down. A great hammer that shattered the Earth and swallowed foes whole. And then they found...a crystal. A simple crystal, as large as a fist. Balamar reached out to touch it…

And found out she’d never really understood what pain meant.

To this day she has no idea if it was simply a trap or something that she couldn’t handle. The blood in her limbs turned to dust. Soon the limbs, too, became dust. Her body aged, her red hair turning great in moments, lines etching themselves into her skin. She should have died.
But, somehow, she didn’t. When she awoke the party had returned to surface. The Hold was saved, but so many had died from the siege and the weapons used to break it that no one was certain if it would ever be able to rebuild. The Embersworn were to evacuate to a cousin clan, and rebuild their numbers before attempting to take the Hold back.

Balamar chose another path. In her mind there was new knowledge, new skills, abilities she didn’t understand. Under her instruction the smiths forged new limbs, of iron and bronze and magic, and once again she walked. What else could this new knowledge do? With the blessings of her Clan, Balamar set out to find out. Once she knew how she could serve, she would return and teach. But the Clan did not need attention, and great deeds brought it.

Instead, she took up her mother’s name, Deepsight, and the helm of her grandfather. None associated the name with Embersworn. And she would hide herself. A simple merchant by day, but something else by night...